Alison Kalinski is an experienced litigator representing independent schools and public agencies, including cities, counties, and special districts before state and federal court, arbitrations, and administrative agencies.  She represents clients on claims of harassment and discrimination, whistleblower retaliation, wage and hour violations, wrongful termination, failure to accommodate, defamation, First Amendment, and due process violations from employees.  In addition, Alison defends schools in litigation on student issues, including disability discrimination, failure to accommodate, breach of contract, and defamation claims. Alison has argued before state and federal courts and the California Court of Appeal and has obtained a workplace violence restraining order to protect employees.

Alison Kalinski also regularly advises independent schools, including religious schools, nonprofit organizations, and public agencies in matters pertaining to employment and students. Alison is a trusted advisor to employers in all aspects of employment issues, including the hiring and termination of employees, the interactive process and leave requests, discrimination and harassment issues, assisting with investigations, overtime, and drafting employee handbooks and agreements.  In addition to employment advice, Alison counsels schools on student and parent issues, including bullying, student discipline, accommodating disabilities, enrollment agreements, student handbooks, parent and tuition disputes, and subpoenas. Alison especially enjoys working with schools and nonprofit clients by helping them meet their legal obligations while achieving their mission and maintaining the values of their school and organization.

Alison is also an experienced presenter and regularly trains clients on preventing discrimination, harassment, and retaliation in the workplace, accommodating disabilities in the workplace, mandated reporting, and other employment matters.

Prior to joining Liebert Cassidy Whitmore, Alison practiced as a litigator in the New York City offices of two international law firms before relocating to Los Angeles.  At her prior firms, Alison represented large private employers in class action litigation arising from gender discrimination and wage and hour matters, and obtained a full dismissal of all claims in both actions.

Committed to pro bono work, Alison obtained cancellation of removal under the Violence Against Women Act for a victim of domestic violence and sex-trafficking and obtained asylum for a refugee from Cameroon who was tortured for being a homosexual. What is “quiet quitting?”  After a recent tiktok post went viral, as described below, quiet quitting has been all over social media and the internet.  A google search on “quiet quitting” turns up 315,000,000 hits!  But what exactly is quiet quitting, where did it come from, and what should public agency employers do about it?… After two years of the Covid-19 pandemic, things are looking optimistic in California.  Covid case numbers and hospitalizations are declining and mask requirements are loosening.  For many, myself included, this is great news and a much needed “return to normal.”  At the same time, however, the pandemic brought some changes to our lives that we…

This article was originally published in October 2020.  The information has been reviewed and is up-to-date as of November 2021. Though the state of California is now opening up increasingly due to improving pandemic numbers, the details included in this blog continue to serve as helpful tips during this time.

I moved to Los Angeles…

One year after the public health emergency caused by COVID-19 began, hope is on the horizon as vaccine production and distribution increases and eligibility criteria for vaccinations expands.  With many employees teleworking during the pandemic, employers are starting to consider post-pandemic working arrangements, including the return of employees to the workplace.  As employers think about… Employers know they need to accommodate a disabled employee’s request to bring a service dog to work.  However, what happens when employees claim they are stressed and need to bring their dog to work for emotional support?  Here are the top five questions on emotional support dogs:

On June 15, 2020, the United States Supreme Court ruled that Title VII of the 1964 Civil Rights Act protects gay and transgender employees from discrimination.  The Court’s decision was 6-3 and the opinion was authored by Justice Gorsuch, who was joined in the decision by Chief Justice Roberts and Justices Ginsburg, Breyer, Sotomayor and… 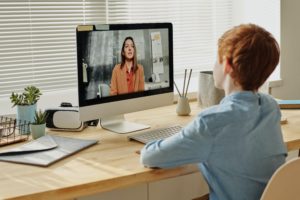 I’ve been working from home since March 16, 2020 when my children’s school closed.  I am not alone – with the COVID-19 pandemic and safer at home orders, many employees across the country have been working from home.  While restrictions may be easing, without schools reopening, many parents are balancing their roles as teachers, parents,…

The United States Court of Appeals for the Fourth Circuit (covering such east coast states as Virginia, West Virginia, and Maryland) recently held that a group of fire Captains are entitled to overtime under the FLSA because their primary duty is being a first responder.  The case, Morrison v. County of Fairfax, Virginia, was…

Many employers have chosen to implement “auto-deduct” policies, which automatically deduct a set amount of time each day or shift for an employee’s meal break.  While the Department of Labor has stated that automatic deductions are lawful under the Fair Labor Standards Act (FLSA), these policies may run afoul of basic FLSA principles if employers…